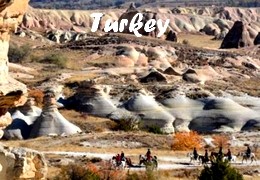 Turkey and Cappadocia on horseback: Turkey is a country steeped in tradition, with an exotic past and a unique geographic location. It is in fact the only country in the world to sit astride two continents - merging East and West. This cultural peculiarity is reflected in its history and its people, and makes Turkey an exciting place for horse riding. Partly mountainous, partly Mediterranean and coastal, Turkey offers a varied range of horse treks. Such a rich history has left an indelible mark and Turkey is full of historical sites and archaeological wonders in a varied and magnificent landscape. The Mediterranean coastline is punctuated by well-preserved Greco-Roman cities such as Pergamum and Ephesus, while the austere and rugged Anatolian plateau has rock churches hidden in the unlikely fairytale landscape of Cappadocia. Istanbul, still the pulse of the nation, has even more to offer, with its Roman aqueducts, Byzantine churches and Ottoman mosques and palaces. 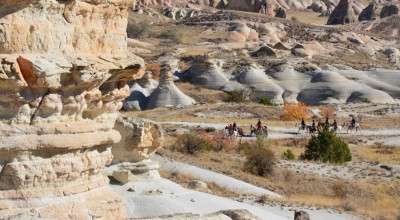 Horse riding trip in TURKEY - THE CAPPADOCIA ON HORSEBACK