Imagine discovering the great wines of Bordeaux on horseback, ride along some of the most famous vineyards in the world ! Cap Rando offers you two incredible equestrian trips.
On our "Bordeaux Wines" horseback trail ride, you will cross the the Cotes de Blaye, Bourg, Fronsac, Lalande Pomerol, Saint Emilion, the Entre deux Mers, the first Cotes de Bordeaux, the Graves and of Sauternes. The citadel of Blaye, built by Vauban in the eighteenth century, the medieval city of Saint-Emilion, the castle of Rauzan and the English bastide of Cadillac (thirteenth century) are waiting for you.
Our "Medoc" trail ride takes place at the edge of the ocean, with mythical castles, nice forests, history and gastronomy. On one side, the Atlantic Ocean. On the other, the estuary of the Gironde and the immense Landes forest. Landscapes are varied, from Lower Medoc marshes to large expanses of the Atlantic with the the ocean waves. Passing through the Graves capes where the waters of the Gironde merge with those of the Atlantic Ocean, the Landes forest and its astonishing pine forests stretching as far as the eye can see, a succession of lakes (Hourtin, Carcans, Lacanau) from North to south. 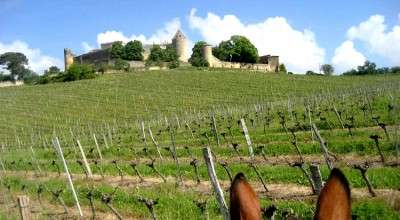 The name of Bordeaux is linked to great wines. No part of France is able to produce a wider variety of the noblest wines than the Bordeaux. Riding through this area, you will have…
8 days 7 nights - 6 days riding
From:
1850€ 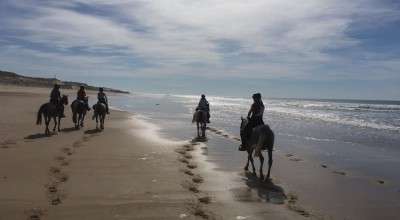 This trip is by the ocean side, mythical wine castles, a place redolent of history and famous food. On one side the Atlantic Ocean, on the other, the Gironde river estuary and the…
8 days 7 nights - 6 days of riding
From:
1850€