Sicily is the largest island in the Mediterranean and occupies a central and strategic position midway between Gibraltar and the Suez Canal, creating a bottleneck between Italy and Cape Bon in Tunisia. The Sicily coast is golden with orchards of orange and lemon trees. In the north-east of Sicily, you will find lush forests. In the central area of Sicily, you will encounter rugged terrain and hills. Vineyards, olive groves, almond orchards and wheat fields complete this picture. Summer is a land of amber under a blue sky. Winter finds palm trees sprinkled with snow in a surreal symphony. Spring is a rainbow of wildflowers contrasting with the green fields. Just over one-third the size of Ireland, Sicily manages to keep the illusion of a small continent. Sicily is home to majestic mountains and the largest natural wonder in Europe, Etna at 3342 meters. Etna is the highest peak and the largest active volcano in Europe. This is where we offer our wonderful horseback trips.

Sicily has a perpetually sunny climate with coastal temperatures rarely going below 15 ° C. The sea warms up relatively early, usually around mid-April, and stays warm until October. Inland, the weather remains cool during the months of July and August when the coastal temperatures exceed 30 ° C, which makes it pleasant to practice horseback riding in Sicily all over the year.

Sicily is also home to the wild horse of Sanfratellani. Black or bay, only a few hundred remain on the northern slopes of the Nebrodi Mountains, in the province of Messina. These wild horses are now a protected species. In winter and spring, it is one of the greenest regions of Sicily, a rugged landscape with seasonal streams, high woodlands and meadows: ideal for grazing and riding.

The diversity and beauty of Sicily are such that the German writer Johann Wolfgang von Goethe wrote: "To have seen Italy without having seen Sicily, it is not to have seen Italy, because Sicily is the key to everything ".

We offer you to go horseback in Sicily with the best provider of the region to discover the landscapes and the culture of the south of Italy. Horse riding to Mount Etna: breathtaking scenery for a superb horseback ride in the heart of Sicily. You will be able to appreciate the culture of this so particular region of the south of Europe, Italy and the Mediterranean: its gastronomy, its architecture ... with the rhythm of your horse.

Superb horseback ride in Sicily. You will discover a mysterious Sicily, between the mountains Peloritani and Nebrodi, places of myths and legends, typical villages, rock formations that stand out in the landscape, mysterious forests and mountains steep. A trail ride between the Ionian Sea and the Tyrrhenian Sea at the foot of Mount Etna. This horseback ride is available on demand all year long for minimum two riders. 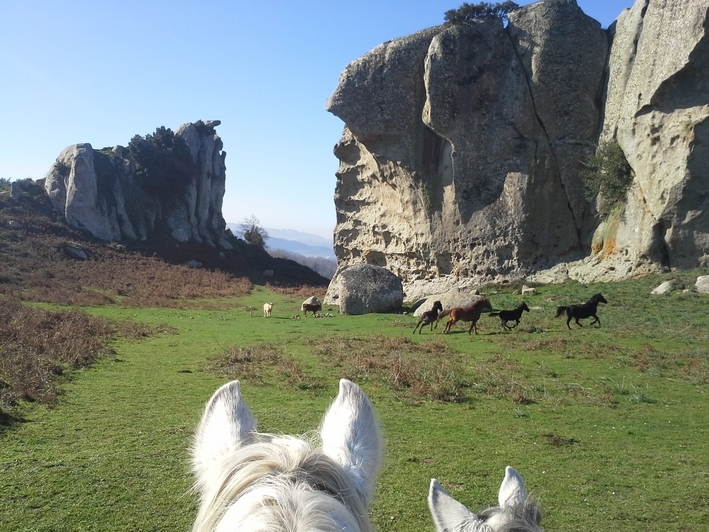 HORSE RIDING TRIP IN SICILY
CROSSING THE SICILY ON HORSEBACK

Horseback riding trip across the Sicily. This horseback trip between the North coast and the South coast of Sicily is a fantastic adventure that allows you to travel the island and discover the variety of its landscapes. A total immersion in its depth made of history and agriculture, magic and legends. 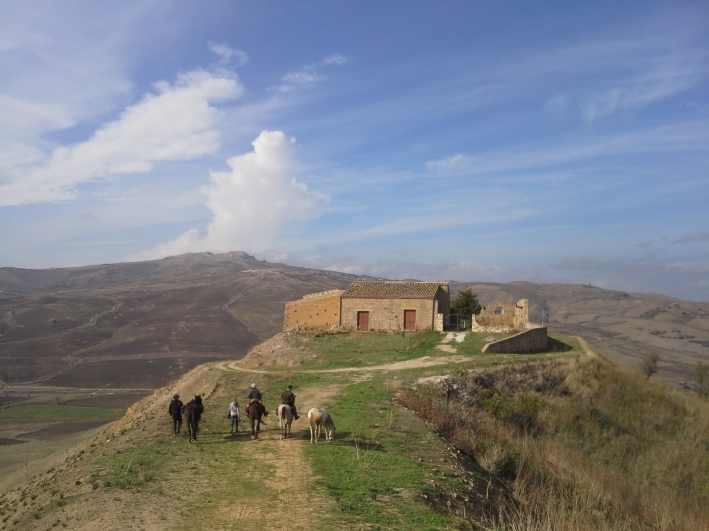 HORSE RIDING IN SICILY
THE MANDONIES NATURAL PARK
A beautiful six-day horseback trail ride in Sicily, which takes you along the full length of the Alcantara Natural Park, setting off from the coast at Taormina and finishing on the slopes of Etna, including an excursion into the Nebrodi Natural Park, where you will find the source of the Alcantara River. This trail is perfect for riders who enjoy discovering new areas on horseback without spending too many hours in the saddle (with 4-5 hours in the saddle each day), but it is no less attractive than Ride Sicily's other trails.  During this trail you will ride through areas of outstanding natural beauty, without missing out on the island's social and cultural side – you will ride through and spend the night in picturesque villages, rich in history – and you will of course have the opportunity to enjoy Sicily's excellent cuisine, which is an essential part of the island's culture. 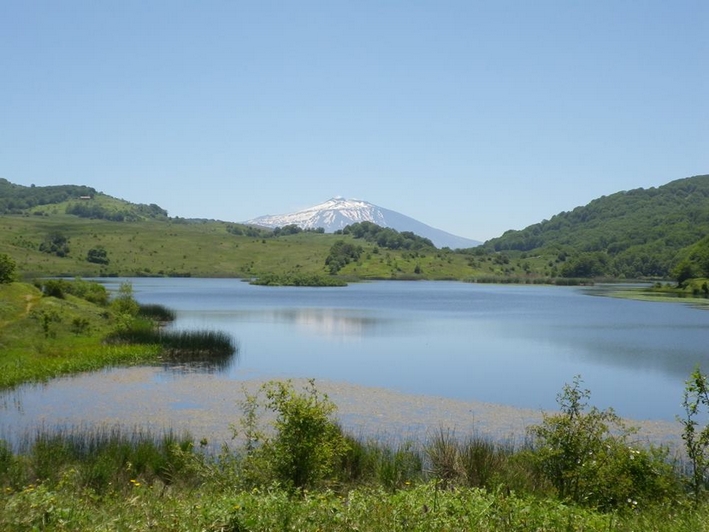 A circular horseback riding tour in Sicily around the Etna, the highest and most active volcano in Sicily and in Europe. You will enjoy the Mediterranean landscapes, food and the Italian tradition. Horseback trail ride in Sicily that allows you to cross the whole north-eastern Sicily (the famus Val Demone) through the four parks of Madonie, Nebrodi, Alcantara up to the Etna. A trail in the greenest and wildest part of Sicily.