Equestrian holiday in Spain. is a Cap Rando flagship destination for horseback riding. In Spain, the offer of equestrian holidays is important, and it is sometimes difficult to find the one that suits you best. In addition, many structures are managed by foreigners (English, German, French) and we prefer to select Spanish guides and instructors, who perfectly know and love their region, speak English and offer quality services.
Thus, we offer horseback trips and riding holidays in different parts of Spain: Catalonia, Castile or Andalusia. Discover Spain on horseback with superb rides in the best parts of Spain for horseback rides: in Catalonia on the beaches of the Costa Brava, in the Sierra Nevada Mountains or in the beautiful Cabo de Gata Park in Andalusia, Extremadura, Sierra de Gredos: a wild country of southern Castile less known from tourists.
In Spain, Cap Rando offers horseback riding for beginners, Inn to Inn trail rides, horse riding holidays particularly suitable for families. Horseback riding in Catalonia on the balconies of the Costa Brava from 3 to 5 days on horseback in star around the same accommodation. A horseback trail ride through the Baix Empordà territory, a temperate climate zone of extreme beauty. A territory rich in history, with many small villages of diverse civilizations, great natural landscapes, a comfortable accommodation with swimming pool, good gastronomy and good wines. An unforgettable horseback riding experience of in Spain. 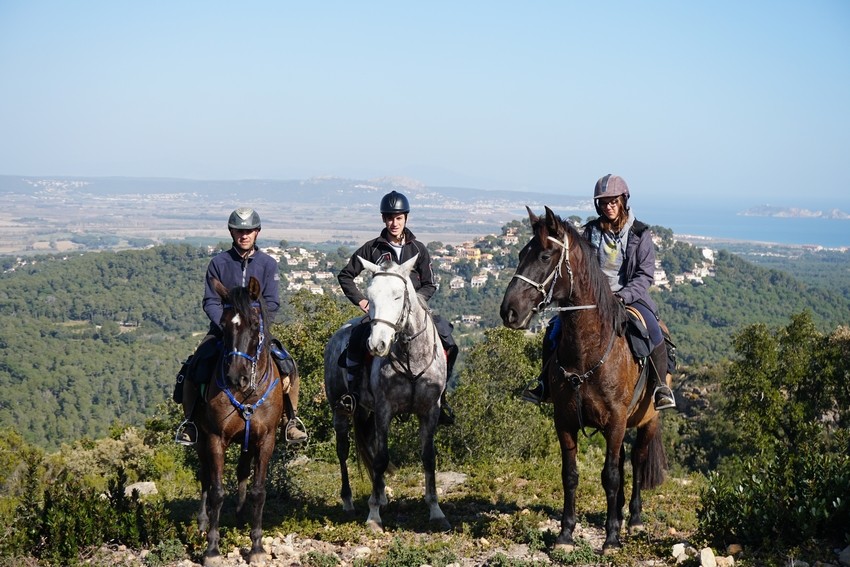 his horseback trail ride in Spain, passes through two large natural areas, from the Baix Empordà region to the Costa Brava, the natural protected area of Gavarres and the Montgrí Natural Park, the Medes Islands and the Ter River. The mountains and the sea accompany you, from the megalithic era to our time passing through the Roman lands, medieval and pirates. 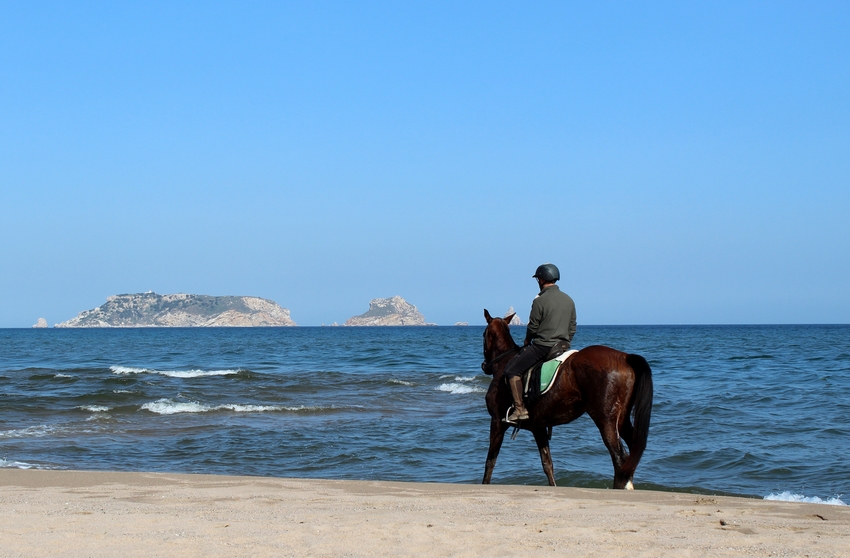 A horseback trip in Spain that will take you from the foothills of the Catalan Pyrenees to the Mediterranean Sea, where you can enjoy the large bay of Roses. You will discover the natural landscapes of Baix Empordá and Alto Empordá, the Mediterranean forest, the coastline and its long sandy beaches as well as medieval villages such as Serra de Daró, Sant Iscle and Colomers. A horseback trip between sea and mountain. 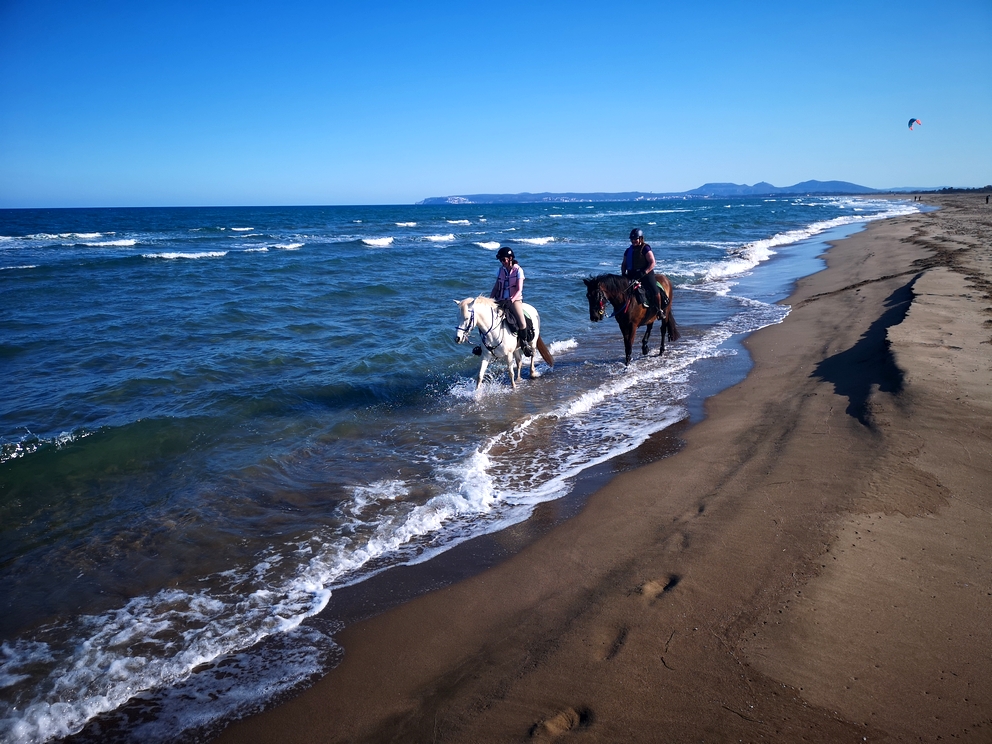 Stationary horseback ride in Andalusia. This program allows you to discover the splendor of the Cabo de Gata Natural Park: its pristine beaches, valleys, small fishing villages ... All without change hotels doing half days. You will discover the trail riding the techniques, in order to reach to be comfortable to ride in the mountains and gallop on the beaches. A perfect program to prepare you for the practice an Inn to Inn horseback ride to enjoy the wilderness on a safe horse. Especially recommended for families, open to non riders. 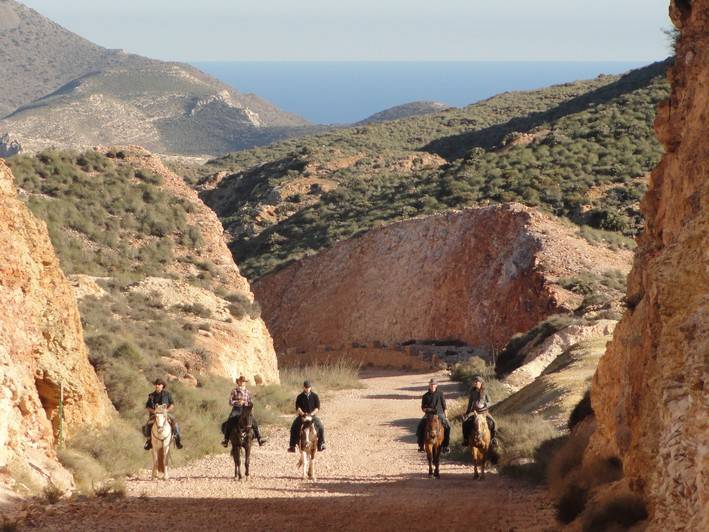 This week is dedicated to beginners who want to quickly be able to ride outdoor. You will alternate lessons in an arena and trail rides in the Cabo de Gata Natural Park. At the end of the week, you will be able to walk, trot and canter with your horse outdoor happy and safe. In addition, you will spend a wonderful vacation in this corner of paradise. This program is perfect for beginners to ride in family or with a group of friends. Manolo has created and led this program for over 25 years, horses are trained to obey the voice and work in groups. Manolo gives lessons on horseback, allowing to control your horse at any and to make quick progress in safety and confidence. Mild temperatures in the Cabo de Gata makes possible to enjoy this experience all the year long. Enjoy the end of your week cantering on beaches ! 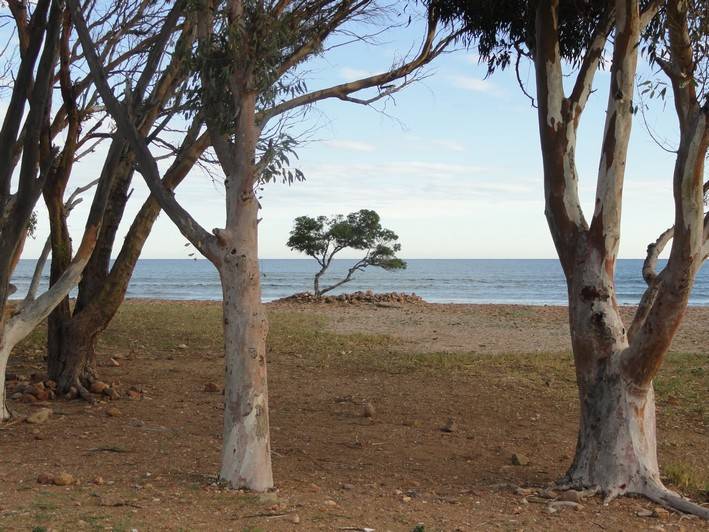 Progressive Inn to Inn horseback trip in Spain. In the heart of Andalusia, South of Spain, this Inn to Inn trail ride offers you to discover the spectacular Sierra Nevada landscapes. Near Guadix, you will ride on horseback in Andalusia through canyons and deserts, contrasting with forests and meadows in the mountains. You will discover nice Andalusian white villages with architectural contrasts between Spanish and Arabian styles: this area was one of the last Moorish occupation in Spain. 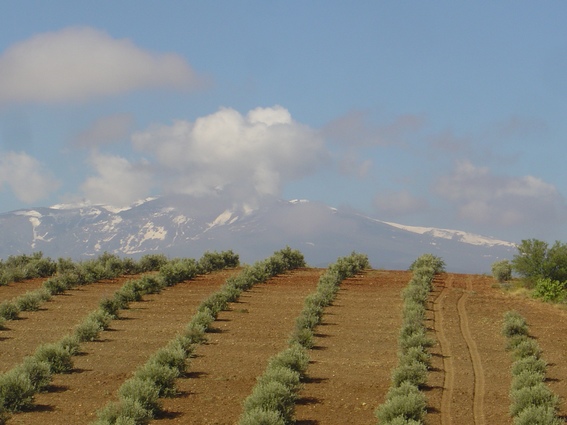 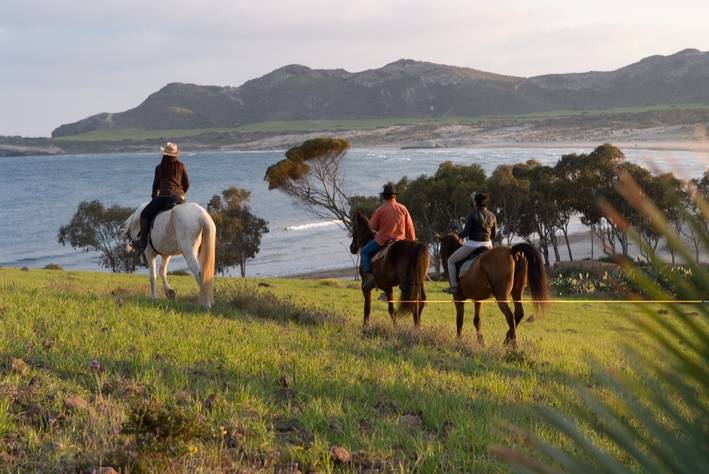 A special horseback riding trip in Andalusia in superior accommodation, designed for those who wish to do less than a full week ride, and possibly extend your stay to visit Andalusia: Granada, Seville, Almeria, Cordoba ...
The Cabo de Gata Park is located in the south-east of Spain in the far south-east of Andalusia, in the Gulf of Almeria. The Cabo de Gata Park is one of the jewels of Andalusia, Spain and the Mediterranean, it is probably one of the few spaces of the Mediterranean coast that has remained wild. Since 1997, the park has been declared a "biosphere reserve" by UNESCO for its ecological wealth. "Where the sun passes the winter": with approximately 2965 hours of sunshine, we can say that it is in this region of Andalusia that the sun passes the winter, with mild temperatures all year round. Small coves with crystal clear waters, ancient volcanoes converted into red lava mountains give the image of the Sierra de Gata, a lunar desert. Oasis of palm trees and small white fishing villages, remind us of the invasions of pirates. Here were shot famous adventure movies like Indiana Jones, Lawrence of Arabia, A fistful of Dollars. Inn to Inn horseback trail Ride in Spain and New Year's Eve in Andalusia, in the Cabo de Gata Natural Park, South East of Spain. Enjoy the most sunny European area for this end of the year Inn to Inn ride. You will ride through the Cabo de Gata Natural Park. It combines routes along the seaside and inside valleys, you will discover beautiful scenery and little unknown villages. And enjoy the New Year's Eve dinner!

Horseback trail ride in Spain in Andalusia between the Southern slopes of the Sierra Nevada and the Mediterranean, in the Alpujarras. This equestrian trip is offered over 4 or 6 days on horseback. The Alpujarras are marked by a succession of fertile valleys descending from Sierra Nevada to the Mediterranean. A wild region with a climate and Mediterranean vegetation, dotted with white villages, typical of Andalusia, with a strong historical past, the last Moor refuge in Andalusia and Spain. 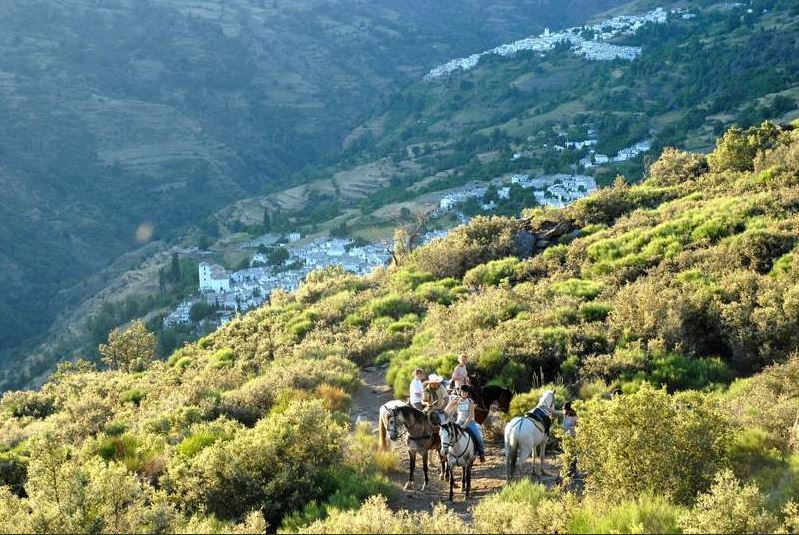 Horseback riding trip in Spain in Andalusia. A superb trip on horseback through the beautiful Sierra Nevada to the Tabernas desert. You will discover the wild beauty of the Southern slope of the Sierra Nevada with superb views of the Mediterranean, before reaching the desert of Tabernas where you will ride in the landscapes that have served as a backdrop for many famous westerns. 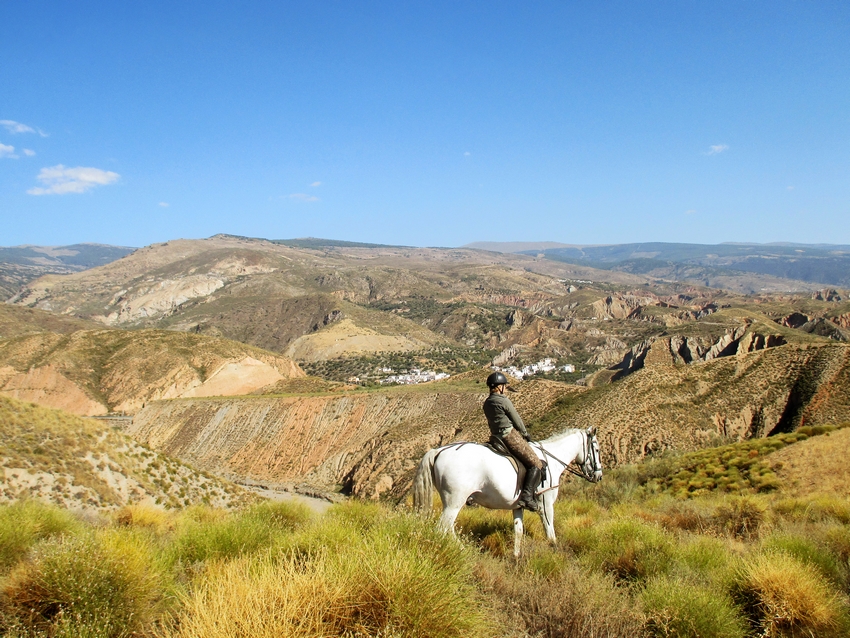 This is a stationary horseback ride in Spain with relaxing full days riding from Navarredonda de Gredos to different direction every day, changing landscapes and opportunities for swimming in the crystalline waters of Gredos Mountains. One day, in the middle of the week, you will ride on a minitrail to a different village. The summer in Gredos is perfect for excellent riding holidays due to the altitude, Navarredonda is at 1600 m, so even in July or August it is not hot for full days riding and perfect for swimming in the fresh waters at lunch stops. It is a relax and comfortable ride, perfect for families and less experience riders, 5 nights at the same hotel, daily trails with different itineraries everyday through the wild landscape of the Gredos Mountains, where you can see Iberic goads, golden eagles or black vultures. Enjoy great lunches in the countryside, barbecues, paella..., after a relax swimming in the crystalline waters of the rivers. 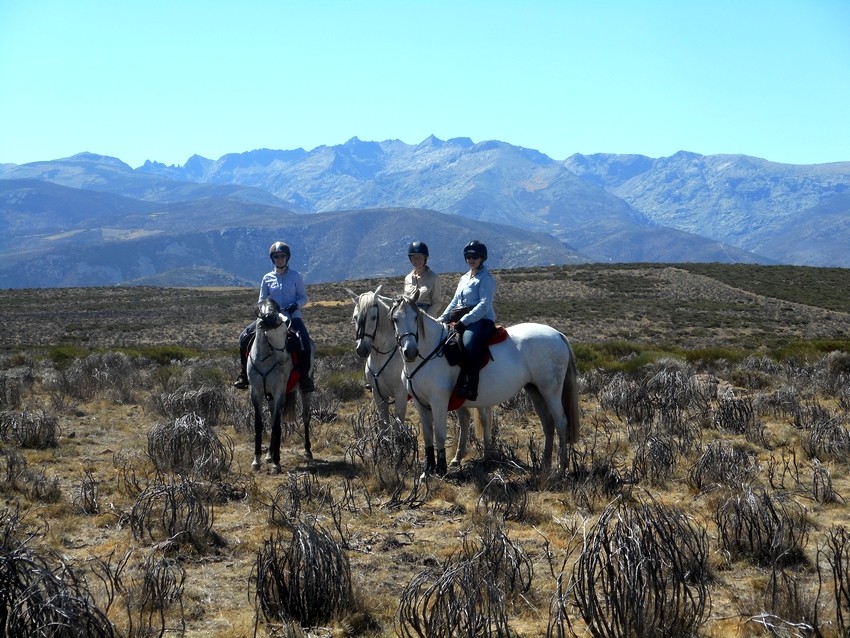 You will ride in Spain following the beautiful valley of the river Tormes, the landscapes are varied with its lakes, canyons, cliffs and meadows. You will cross medieval villages full of history and breathtaking landscapes. Your native guide of the region will present you these landscapes and the history of this country which fascinates him. 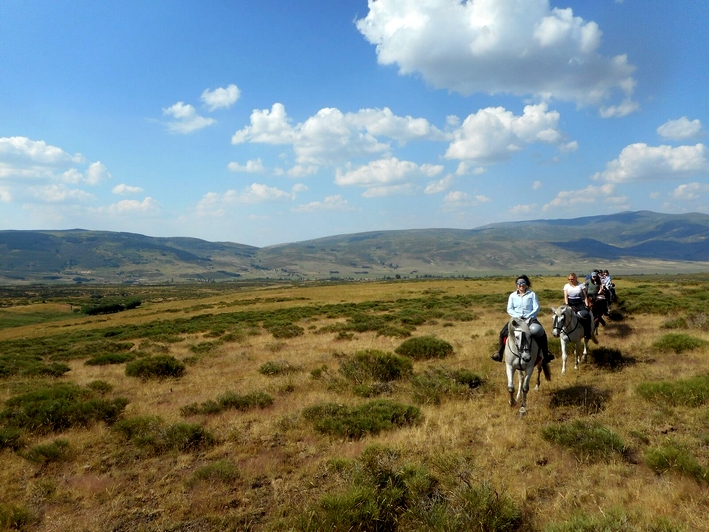 This horseback riding trip in Spain starts and finishes in Trujillo, a historic town with a mix of cultures. Trujillo was originally founded in prehistoric times on a granite batholith, then became the Roman town of Turgallium before the Arabs built a spectacular castle above the town in the 10th century. Trujillo was the birthplace of Francisco Pizarro and his brothers, who conquered Peru, as well as Francisco de Orellana who was the first to navigate the Amazon river. Pizarro's statue stands in the main square (Plaza Mayor) and there are many beautiful palaces around the square which were built by the Spanish Conquistadors in the 16th century. This ride takes you through spectacular woodland, pasture and the Dehesa (Mediterranean forest) of holm and cork oaks: the emblematic landscape of the Extremadura. You also ride in the Villuercas Geopark which offers great footing for the horses. 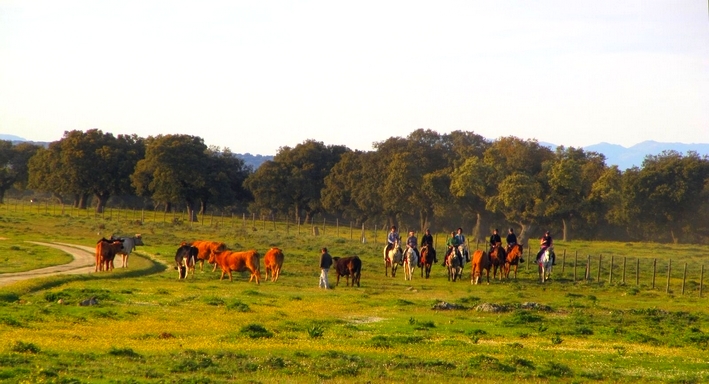 This horseback riding trip in Spain. You will have the opportunity to become the guardians of the ancestral tradition of our culture: the transhumance, a horseback trip from Extremadura to Gredos Mountains in spring (North Transhumance ride) and from Gredos to Extremadura in autumn (South Transhumance ride). A progressive 7 days ride, following the Cañadas Reales, medieval cattle droves, North direction to Sierra de Gredos, crossing different regions and riding a long distance from the winter pastures in Extremadura to the summer pastures in Gredos Mountains. Spain is crossed by old cattle routes that served the pastoral economies of yesteryear. In Spain, these trails are called “cañadas reales” with 75m wide and around 800km long. They are still used by cattlemen who practice transhumance, spending summer in the mountains with their cattle and returning each autumn to the winter pastures. These old trails are more than merely routes for sending livestock to market. These routes are the toll motorways of yesteryear, the infrastructure that sustained transhumance. This is a real experience, travelling on horseback, you will follow the “Cañada Real” from Trujillo to Navarredonda de Gredos or vice versa, crossing 3 different regions in Spain (Extremadura, Castilla la Mancha y Castilla y León), riding in Cáceres province, Toledo province and Ávila province. Exclusive for good riders ! 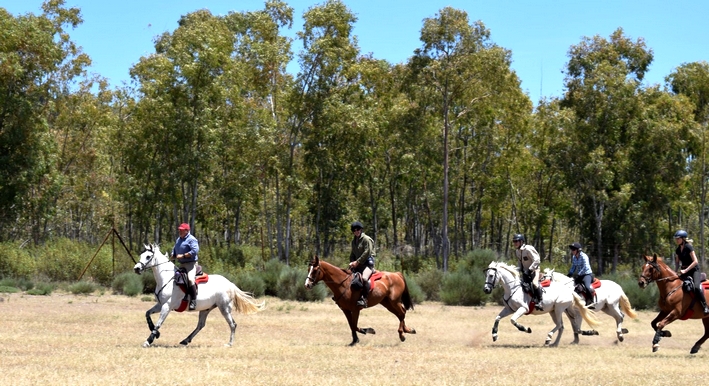 Inn to Inn horseback trail ride in Spain. You will ride from the lovely town of Trujillo following North direction to the Monfragüe National Park, the largest and best preserved Mediterranean forest worldwide. The Monfragüe National Park is a wonderful place to visit for Mediterranean flora and ornithology. Located close to Trujillo, with the Tajo river running through it, the Monfragüe National Park is unique, it was declared a Biosphere Reserve by UNESCO in 2003. Monfragüe takes its name from the Romans, who called it Mons Fragorum, the fragmented mountain. It is a typically Iberian landscape that provides a home for the Park’s incredibly diverse flora and fauna. Cork oaks, wild olives and holm oak trees are surrounded the National Park. The most popular birdwatching spot for visitors is the “Salto del Gitano”, a 300 meter cliff above the Tajo river. You will be able to admire the black storks, vultures, Egyptian vultures and imperial eagles ... just a few of the many birds that nest in the “Salto del Gitano”. The Park is also the site of Monfragüe Castle, an Arab construction. People have left many other marks on Monfragüe over the ages, with many prehistoric cave paintings. 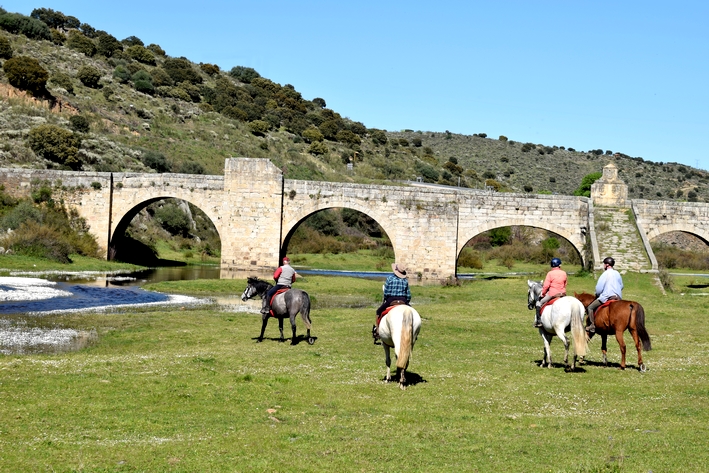